Images and Media for Meeting Planners

Here are links to Toolie's photos, introduction, and media for use with an upcoming program.

The biography listed to the right should be used as an introduction at the beginning of Toolie's programs. Simply click to download the PDF.

Right-click on the desired link at right to download the file. These are Portable Network Graphic (PNG) files, which are similar to JPEGs but which provide better quality reproductions. Use them as you would a JPEG. Custom sizes are available on request.

Here are some things you probably didn't know... 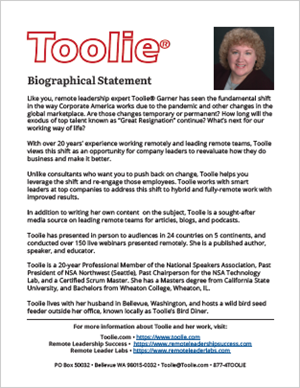